In my recent conversations with people about my travels in India one theme kept popping up: fear.

Wasn’t I afraid to travel alone? Wasn’t I afraid I’d get sick/lost/robbed/etc? I heard many people say they couldn’t do it and how gutsy I must be. Here’s the secret: I don’t go because of a lack of fear but rather the presence of it. Fear and I are good friends. 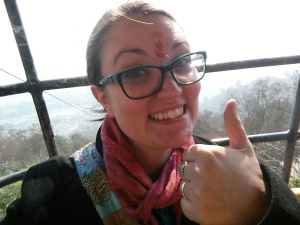 (Me, slightly terrified but enjoying the view, on a gondola in India)

The truth is that it’s scary to travel far from home. There’s a moment when I find myself in an international airport hearing unfamiliar languages, trying to decipher signs, and being faced with the immediate sense that I’m not in Kansas (or, more accurately, Minnesota) anymore and that’s when I wonder what the f*** I was thinking. I have a moment of terror but I throw on a smile (fake it until you make it, right?) and just put one foot in front of the other. I find a bathroom, make my first local purchase (a cup of coffee or a soda) and take comfort in the fact that I’ve mastered two basic human needs so far. I figure out my next step (usually getting to my hotel/hostel) and pretty soon fear goes back into hiding. As each new challenge arises (finding food/an ATM, arranging transportation, calculating exchange rates and corresponding value, etc) I find myself running back into my old friend fear. I say hi and keep moving along until pretty soon I’m navigating my surroundings with ease and fear stays where it belongs. It might pop in to say, “Let’s not go down this street right now,” or, “Let’s take that taxi instead of this one,” and in those cases I usually take fear’s advice. Fear has a part to play but it doesn’t run the show.

Fear can be a great guide when combined with knowledge, action, and faith. I might be afraid of getting sick so I learn what in the area might make me sick and take the appropriate steps. Drinking tap water is not advisable for Westerners in India so I stick to bottled or boiled. There are knowledge and action at work. The next piece is faith. Once I’ve learned what I can and acted accordingly the rest has to be left to faith. Faith is what lets you step out into the unknown with the belief that you’ll find your footing. I have faith that even if I get sick I’ll be ok. I have some over the counter medicines and antibiotics as a back-up plan and frankly it wouldn’t be the first time I’d gotten sick while traveling. That’s where fear meets experience.

The more scary things I encounter and work through as I travel the more confident I become. I’ve been lost in Madrid, Amsterdam, Buenos Aires, and New Delhi but I learned how to get un-lost and I survived. I’ve learned to deal with a cold shower (or no shower at all), how to communicate in charades when language fails, how to cross busy uncontrolled streets, and how to roll with the unexpected. I’ve been pick-pocketed, eaten weird foods, slept on rock-hard beds, and yes, I’ve gotten sick. Most importantly I’ve learned that a lot of scary things are really not the end of the world – some are actually kind of fun. I’m careful, I don’t take huge risks, and I do my research before setting out on new adventures but then I let faith carry me through the rest. Experience has shown that it will work out.

The overcoming of challenges and fears in my travels has led me to be more confident in my non-travel life as well. Knowing that I’ve looked fear in the face and overcome obstacles is hugely empowering. I know that I can figure out how to communicate with someone without a shared language so I know that I can express my needs at work. I had a crazy train-delay lead to enlightening conversations with new friends and had a better time than if things had been as-scheduled so I’m less panicked about things going according to plan at home. I’ve learned when to stand my ground and when to go with the flow at home and abroad. I’ve learned that the key to crossing a congested street in an area with lax traffic laws is confidence. You need to gauge the traffic flow and once you decide to go you need to commit and go with conviction. Isn’t that a great metaphor for life?

Ambrose Redmoon is quoted as saying, “Courage is not the absence of fear, but rather the judgment that something else is more important than fear.” I couldn’t say it better myself. I’m not a fearless traveler; I’ve just learned to put fear in its place.